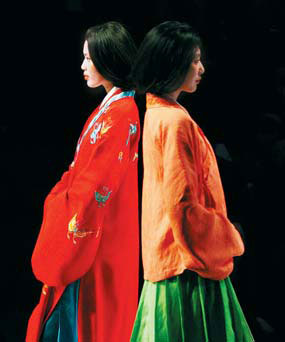 Models display Chinese-style clothes at a show during this year’s China Fashion Week.

Fashion weeks are being staged everywhere, and there’s practically a host city for every letter of the alphabet. But only four cities occupy the top spot, attracting the biggest fashion houses and designers, buyers, stylists, fashion journalists and, of course, celebrities. They are New York, London, Milan and Paris.

Beijing recently hosted China Fashion Week, which got some media mileage overseas, but it’s just not on the agenda of the global fashion industry’s movers and shakers. Even Chinese celebrities, who show up at fashion shows on the other side of the world, were few and far between in Beijing last week.

The Shanghai stylist Clement Buyi Z, who styles fashion shows and magazine shoots under his Clement and Clement Production, began attending the “big four” fashion weeks three years ago. Despite his hectic schedule, he says he makes time to attend at least the Paris and New York fashion weeks every year. But a trip to Beijing to attend China Fashion Week is apparently too much trouble.

“The shows are boring,” he says. “They’re not well organized. They’re all kind of the same. The time I spend at China Fashion Week is just not worth it.”

“If you’re then trying to position it as a prestige event on the world stage, you’ve got to have something that buyers are never going to find anywhere else.” Amanda Kaiser, Asian editor of the trade publication Women’s Wear Daily, says it’s wiser for China Fashion Week to build up its name in the region rather than to compete with the international fashion capitals, where the fashion world seeks direction.

“I think that, in the interim, it makes sense for regional fashion weeks to try to become big regional players, and then perhaps more international interest from the mature markets will come,” she says.

“So it’s going to be very difficult to get some of these people to travel to China or to Japan or to Brazil for another fashion week.”

Fashion weeks are semiannual, so host cities scattered all over the globe are competing for the attention of fashion VIPs twice a year.

Rapley advises patience and uses her home city’s 28-year-old fashion week as an example. (New York, the first fashion week, has been around for 69 years.) China Fashion Week, in comparison, is 15 years old.

“London Fashion Week has had a roller coaster ride,” she says. “It probably took some 20 years to get some recognition that this was something buyers needed to come to. Because that’s what it’s about, it’s getting buyers to come. And if you get some A-listers, that brings the buyers like bees to the honey pot. But it is very hard work.” 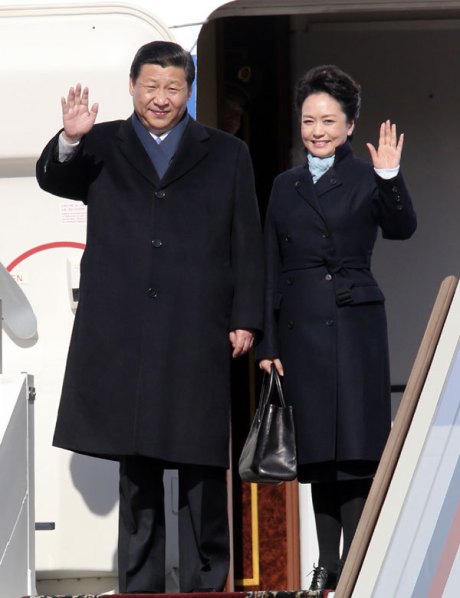 Mr Xi, with his wife Peng Liyuan, will head to South Africa after Russia

The moment when China’s first lady Peng Liyuan made her diplomatic debut upon her arrival at Moscow, wearing a dark navy overcoat, a light turquoise silk scarf with a matching handbag, the Chinese fashion industry got a boost.

Labeled by Internet fans as the real Liyuan style, China’s first lady Peng Liyuan’s fashion acumen won considerable praise from her followers when she made her diplomatic debut during her arrival in Moscow on March 22.

Images of Peng stepping off a plane arm-in-arm with her husband, President Xi Jinping, have circulated widely on the Internet, prompting praise for her style, which Web users described as understated and sophisticated.

Fashion critic Yue-Sai Kan spoke highly of Peng Liyuan’s wardrobe and fashion sense at a press conference for the launch for her new book “Life is a competition” on March 26 in Beijing.

It’s not clear which company or companies designed the clothes worn by Peng in Moscow. But people get the information that these clothes are local style. A newspaper said that Peng was wearing a jacket and purse made by Exception de Mixmind – a top-end Guangzhou-based brand – while another report on news portal Sohu.com said the Guangzhou Administration of Quality and Technology Supervision confirmed that Peng’s clothes were custom-made by Ma Ke, the chief designer for the WuYong brand.

However, regardless of the brand, Peng’s endorsement of Chinese labels has surprised millions of Chinese who favor foreign fashion brands. 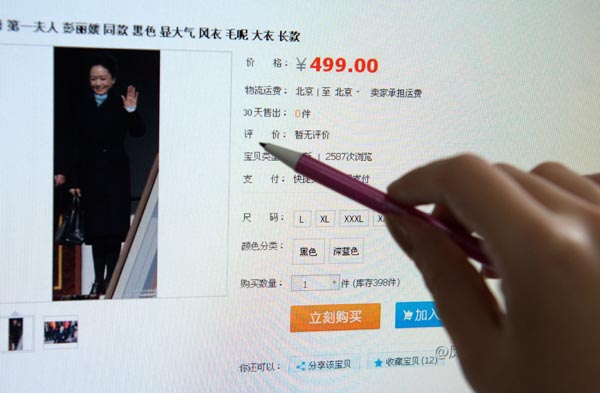 A number of Taobao sellers have begun offering garments based on styles worn by China’s first lady Peng Liyuan.

The first lady’s style was dubbed by netizens as Liyuan style. The exact purse and coat she donned have become top search items on taobao.com, a major shopping website in China. Also, Exception’s physical stores have seen a rising number of visitors.

Domestic fashion brands’ stock prices were also boosted on Monday by the first lady’s choice. Local designers and fashion brands always get a boost when the wives of State leaders choose domestic brands for important occasions. For local fashion brand and designers, it is another fantastic fashion PR strategy.

Do you think the first lady would be the label of domestic fashion? And should it be another spark idea that a fashion PR should take advantage of? 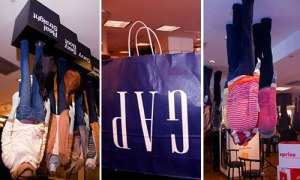 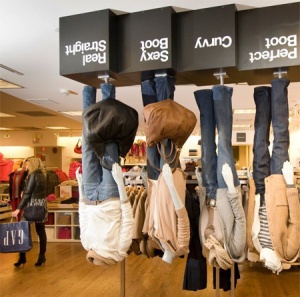 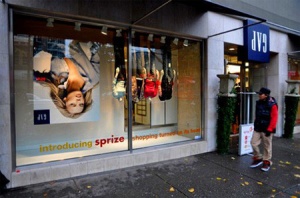 What to say in fashion industry advertising?

It is understood that the first considerations must be the advertising objectives and the target customer, but the focal point of an advertising message is the advertising appeal. The appeal should tell potential buyers what the product offers and what it can do for them, Themes are often developed to provide continuity to an advertising campaign, but are also commonly used to reinforce a brand image, thereby helping to maintain distinctive competitive positions. Themes also help ease the introduction of new fashion products and services.

Or you can just jump out of the box and think about new ideas that could attract people’s attention, like the three commercials above did.

How to convey the message in fashion industry advertising?

What kind of Fashion Advertisement would make you feel interesting?

Part of guidelines and advices  are coming from the book

Do you remember what your grandpa is wearing today? Most grandpas might wear old-fashioned cloths and stay away from the word “Fashion”; at least it is true in China.

However, Grandpa Style becomes very popular in China last year. Photos of a 72-year-old man posing as a “female” model in stylish clothes went viral on the Internet after his granddaughter posted them on her clothing store on Tmall.com, China’s largest retail website. 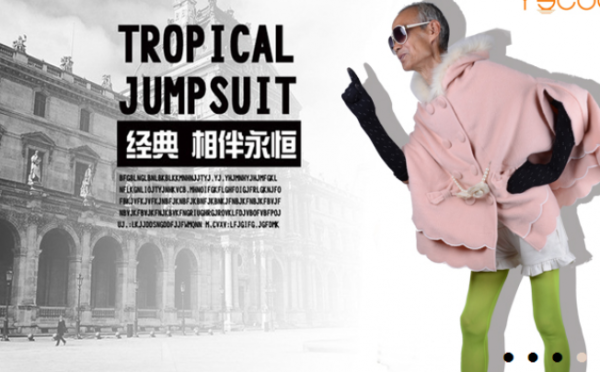 Wearing aviator sunglasses and a selection of thigh-high tights and frilly skirts, 72-year-old Liu Qianping has caused quite a stir in China. 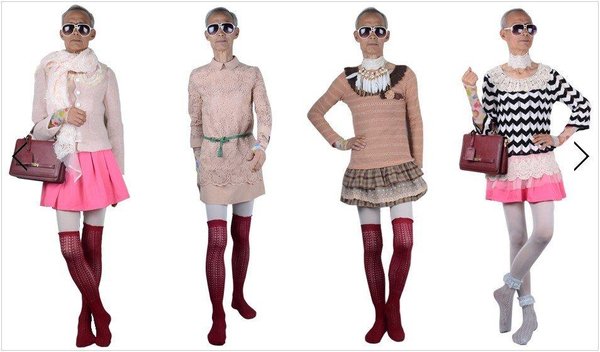 In the past few months, images of the former farmer from Hunan Province in China have appeared on Taobao, the Chinese version of eBay, marketing clothes for Yecoo, a business set up by his granddaughter Lv Ting and four of her friends. 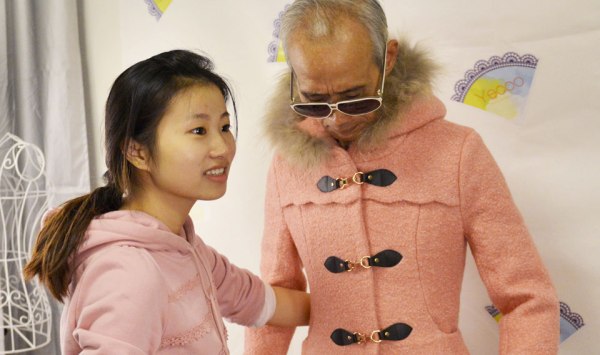 Lv invited her grandfather to visit her in the southern of Guangzhou, and while unpacking boxes of clothes to sell, he pulled out — and slipped on — a hot pink cloak. 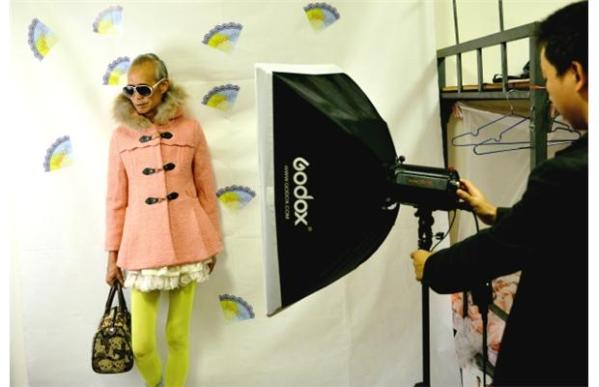 Struck by how well he wore it, a friend assembled some amateur lighting and starting taking photos that were later posted online. 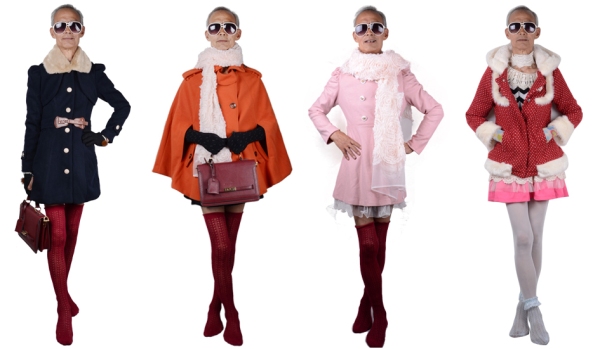 END_OF_DOCUMENT_TOKEN_TO_BE_REPLACED

So far this awards season，many stars with gorgeous dresses shined adorably to walk the red carpet. When I was reviewing informations about popular fashion in these awards, a series of interesting photos attracts my attention. 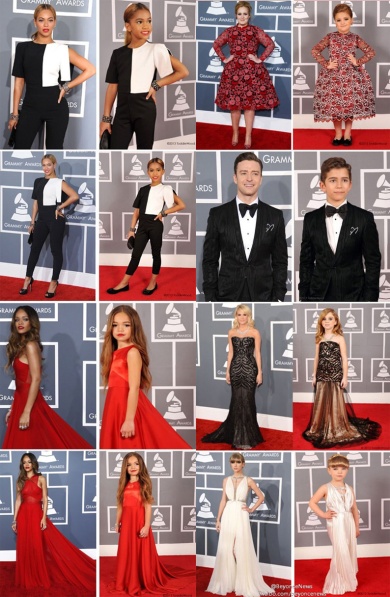 Adorable, right? Thanks to the pint-sized stars of New York-based project ToddleWood, Tricia Messeroux’s got some cute competition for all the fashion lovers and movie & music fans.

END_OF_DOCUMENT_TOKEN_TO_BE_REPLACED

Do you remember Andrea “Andy” Sachs (Anne Hathaway) in the film The Devil Wears Prada? Thousands of girls are looking forward to get a job like this, working around all kinds of gorgeous dresses. Actually this is Fashion PR.

END_OF_DOCUMENT_TOKEN_TO_BE_REPLACED

The theme of this season series is freedom, which is inspired by the speech about freedom made by President Roosevelt on January 6, 1941. Yeohlee also hopes to design clothing for women’s convenience. The season design is a feast of color. Apart from the most popular color in the Fashion Week like red, white, black, gray, Tang Yao Li added dark green with purple, brick red with orange and other dark colors.

With accompaniment of cheerful violin, models stepped on the T-stage one by one. All of them were wearing black stockings and black shoes or black boots, and many of them tied back ponytail. They showed a classic Eastern style. A total of 16 sets of clothing were showed, with simple casual street style of New York in the fall. These styles includes easing in long cardigan wool coat, a sleeve round neck loose skirt with fold Leggings, black and white plaid skirts, etc.,as well as similar Chinese lantern shape skirt dress. The finale is a sling deep orange silk gown, which displayed the New Yorker casual and uninhibited style.

Yeohlee said with a laugh that, coincidently, right now is the Chinese Lunar New Year. She also useda lot of Chinese red, which added some New Year’s taste in her season’s work. 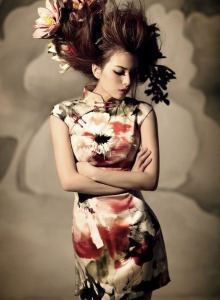 The cheongsam is a female dress with distinctive Chinese features and enjoys a growing popularity in the international world of high fashion.

The name “cheongsam,” meaning simply “long dress,” entered the English vocabulary from the dialect of China’s Guangdong Province (Cantonese). In other parts of the country including Beijing, however, it is known as “qipao”, which has a history behind it.

When the early Manchu rulers came to China proper, they organized certain people, mainly Manchus, into “banners” (qi) and called them “banner people” (qiren), which then became loosely the name of all Manchus. The Manchu women wore normally a one-piece dress, which, likewise, came to be called “qipao” or “banner dress.” Although the 1911 Revolution toppled the rule of the Qing (Manchu) Dynasty, the female dress survived the political change and, with later improvements, has become the traditional dress for Chinese women.

Easy to slip on and comfortable to wear, the cheongsam fits well the female Chinese figure. Its neck is high, collar closed, and its sleeves may be either short, medium or full length, depending on season and taste. The dress is buttoned on the right side, with a loose chest, a fitting waist, and slits up from the sides, all of which combine to set off the beauty of the female shape. This fitted dress is often made up in shimmering silk, embroidered satin or other sensual fabrics. Best on athletic or slim figures, the cheongsam is an acceptable alternative to the little black dress for special occasions.

END_OF_DOCUMENT_TOKEN_TO_BE_REPLACED 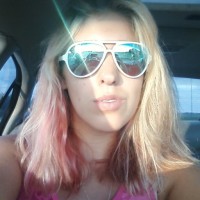 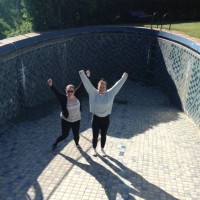 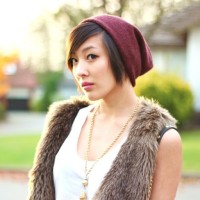 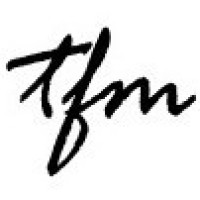 Real thoughts and opinions on films and television by a reel fan. Jacki Krumnow Jacqueline Krumnow

Off-The-Rack
Fashion and the Geek

A light hearted romp through fashion, food and everything in between

Stories not to tell

Food and wine pairings on a young professional dime